New Alert: Our drive-ups, ATMs & telephone support remain open, even under Governor Sununu’s Stay-At-Home Order. See the COVID-19 updates below for the latest on our response. 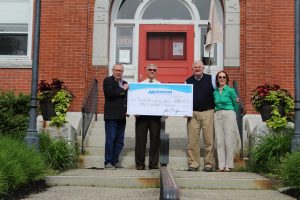 Meredith Village Savings Bank (MVSB) has pledged to make a $100,000 contribution to the Meredith Library Fund. The contribution will go toward the renovation, expansion and equipping of the Meredith Public Library. Since 1901, The Meredith Public Library has been a Main Street cornerstone, playing a critical role in making culture and education accessible to the Meredith community. Although the library has a modern mission of being the informational heart of Meredith, its staff and trustees are confronted by the limitation of its 19th century building structure, which has several engineering, architectural and safety challenges.

“We’re very grateful to Meredith Village Savings Bank and their $100,000 pledge toward the library’s renovation and expansion efforts,” said James McFarlin, President of the Meredith Library Fund. “We are working to re-build a library that meets the needs of today– a place for everybody to meet, converse and learn. The Bank’s very generous gift is sure to have a lasting impact on community members and visitors for generations to come.” The Meredith Library Fund campaign, which launched on February 1, 2019, has already received more than $500,000 in pledges toward its goal of $1,125,000 by March 1, 2020.

“MVSB is happy to do all we can to support the mission of the Meredith Library Fund,” said Rick Wyman, President of MVSB. “The library, which enhances access to an endless array of educational tools and reading materials in Meredith, has been a local landmark for nearly 120 years. We’re honored, in our 150th anniversary year, to be able to support the Meredith Library Fund and their efforts to renovate and expand our Public Library.”

The mission of the independent Meredith Library Fund is to obtain tax-deductible donations and grants to provide a philanthropic opportunity to help equip, renovate and expand the Meredith Public Library and reduce taxpayers’ cost for the project. For more information about the project and details about donating, visit meredithlibraryfund.org.

The Meredith Public Library, located in the heart of downtown Meredith, on 91 Main Street, currently houses 40,000 items including books, audio books, magazines, DVDs and CDs. It has numerous computers with internet access for patron use as well as public Wi-Fi. Off-site members are also given access to the library’s downloadable audio and electronic books. For more information, visit meredithlibrary.org.