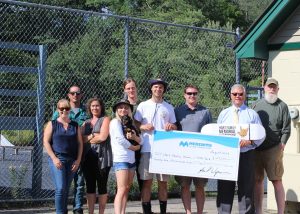 Glenn Hart, a beloved member of the Lakes Region community and former co-owner of Hart’s Turkey Farm Restaurant in Meredith, passed away in 1998. Construction for the original Skate Park completed in 2003 from the memorial fund that was created in his honor. Although it has contributed many years of joy to the community, the passing of time has not been kind to the park. Its current condition compelled Brendan Hart, Hart’s son, to begin fundraising efforts in 2017 for massive repair and renovation.

“My brothers and I grew up at that skate park,” wrote Brendan Hart on the project’s initial Go Fund Me post. “Today, the skate park has fallen apart. This wood-and-sheet-metal park has not aged handsomely. For us, and many others, it’s heartbreaking. All of the money from this campaign will go toward renovating my dad’s park.” Plans for the new Skate Park incorporate all-concrete construction, which would require little maintenance and upkeep.

Linda Hart-Buuck, Brendan Hart’s mother, was the president of the Friends of Meredith Parks and Recreation and assisted fundraising efforts until her sudden passing on January 9, 2019. Peter Thorndike became the nonprofit’s new president and has been working with Brendan to finish the project, which they renamed to honor Linda as well as Glenn.

After the Tony Hawk Foundation announced a $25,000 donation to the Hart Family Memorial Skate Park, local service organizations began following suit. The entire project is seeking to surpass its fundraising goal of $232,000. “We’re very grateful to Meredith Village Savings Bank and their generous contribution to re-build the Hart Family Memorial Skate Park,” said Thorndike. “The Bank’s gift is sure to have a lasting impact on community members and visitors for generations to come.”

“MVSB is happy to do all we can to support the Hart Family Memorial Skate Park,” said Rick Wyman, President of MVSB. “It has been popular with the youth and families of our area and we are proud to support the efforts to renovate and improve safety. The park offers an opportunity for something fun and different from traditional organized sports. This way, even the youth less inclined to participate in organized sports are able to get fresh air, challenge themselves and build their coordination and physical skills.

Donations can be mailed to Friends of Meredith Parks and Recreation at 1 Circle Drive, Meredith, NH, 03253, with “Skate Park” noted in the memo field.

Since 2003, the Hart Family Memorial Skate Park has offered Meredith a unique way for residents and visitors to enjoy the outdoors. The Park joins the Laverack Trail at Hawkins Brook and the Sculpture Walk, as part of several non-lake related attractions that make Meredith an engaging place to visit and live.